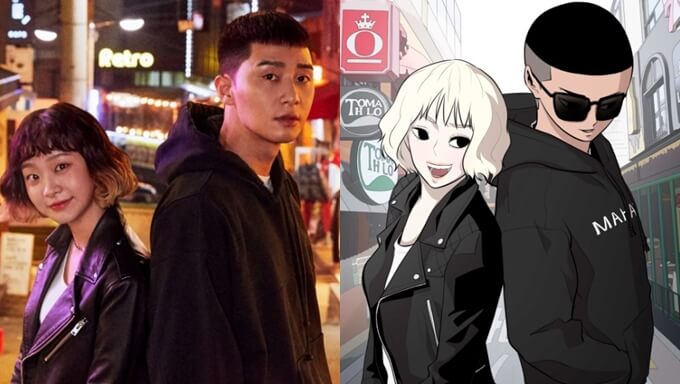 South Korean productions never fail to impress us. They show us great stories and characters that end up enveloping us and causing many feelings and emotions throughout their episodes. But did you know that K-Dramas can be original or based on different webtoons? That is how it is! And each one offers such stunning stories that you can’t stop watching. But in recent years, webtoon-inspired K-Dramas have become very popular. These television adaptations of Korean comics are becoming more and more popular among Korean and foreign audiences. And with them, the stories that K-Dramas offer us are getting better and more captivating. If you are interested in knowing some K-Dramas that are based on webtoons, stay on Korean Fashion Trends!

Also known as manhwas, webtoons are comics or Korean digital comics. The writer/illustrator publishes a weekly chapter, and millions of readers subscribe to these weekly updates. But many cartoonists not only have the creativity to draw. Some of them also create scripts and characters that are suited for television. It is how webtoon-based K-Dramas are born. One of the most striking characteristics of K-Dramas that are based on webtoons is that they sometimes change the ending. If you read a webtoon and did not feel satisfied with the ending, the K-Drama may offer you a different one.

What K-Dramas are based on Webtoons?

It is a gentle story drama but, above all, very emotional. It stars Song Kang, Park In Hwan, and Na Moon Hee. Navillera tells the story of a 70-year-old retired postman named Shim Deok Chul, who has always wanted to be a dancer. He meets Lee Chae Rok (Song Kang), an aspiring dancer. He is going through many difficulties in life. The webtoon is also titled “Navillera.” It is written by Hun and illustrated by Ji Min. It premiered in 2017 and was quickly selected to be adapted into a K-Drama. Navillera officially aired on Netflix on March 22, 2021, and it has received positive responses from viewers. It is a favorite among K-Dramas that are based on webtoons.

This K-Drama stars Lee Je Hoon. He plays Kim Do Ki, a taxi driver whose job is to help oppressed people take revenge. The series is about the webtoon written by Carlos and illustrated by Lee Jae Jin. The series has many action and fight scenes. For that reason, it is exciting to watch. The webtoon also has a dark feel to it that makes it entertaining. Thanks to the fact that it managed to get a good audience during its broadcast, it is also part of this list of K-Dramas that are based on webtoons that you should watch immediately.

The K-Drama premiered in 2020, and its stars are Park Seo Joon and Kim Da Mi. Itaewon Class is a drama about Park Saeroyi, a boy who gets expelled from school. He decides to open a pub to achieve success and leave his past life behind. This drama is an adaptation of the webtoon of the same name. You can enjoy the story in both the drama and the webtoon. This particular K-Drama was famous among K-Dramas that are based on webtoons.

The K-Drama premiered in 2020, and its stars are Moon Ga Young, Cha Eun Woo, and Hwang In Yeob. In this romantic comedy-drama, we meet a girl who overnight becomes the prettiest in her school thanks to her makeup. She is deeply in love with the most popular of the school. Will she be able to make him fall in love without her finding out her secret? You can find out the answer by watching the K-Drama. Or also by reading the webtoon. While they have some differences, it is essentially the same story.

The K-Drama premiered in 2020, and its stars are Ji Chang Wook and Kim Yoo Jung. In this K-Drama, we experience the romance in a convenience store between an employee and the boss, who had previously met and exchanged numbers but never called. Was it fate that brought these people together in a market? Have fun with this drama and the story that the Backstreet Rookie webtoon prepared for the world. While the K-Drama didn’t have much popularity compared to the webtoon, it is still worth watching. For that reason, it is among this list of K-Dramas that are based on webtoons.

The K-Drama is about the webtoon that Kim Dal Nim wrote. Lucky Romance was released on February 15, 2014, and lasted until November 22, 2014. Choi Yoon Kyo adapted it into a K-Drama and got released on May 25, 2016. Its stars are Ryu Jun Yeol and Hwang Jung Eum. The story involves Bo Nui, who works hard to help pay for her little sister’s hospital bills. She meets Soo Ho. He is a genius and owner of a game company. The two end up falling in love despite their differences. It is a K-Drama and a webtoon with a cute and cozy story.

And at number 7 among K-Dramas that are based on webtoons, we have Extraordinary You. The story is about a world within a comic where a secondary character named Eun Dan Oh passes through the fourth wall. She begins to realize her place in the comic and desperately wants to change her destiny. This drama is based on the webtoon written by Moo Ryoo. But the webtoon has a different title, it’s July Found by Chance. Both the webtoon and the K-Drama are two hits that you can’t miss.

In an age where cell phones seem to have the answer to everything, a new application emerges that alerts you if someone around 10 meters from you is in love with you. This application leads many to meet their first love and leaves others heartbroken. The drama stars Kim So-hyun, Song Kang, and Jung Ga-ram. It is a K-Drama that is also based on a webtoon. The story was famous both on its television and in its comic format.

9. My ID Is Gangnam Beauty

When it premiered in 2018, this Korean drama gave a lot to talk about due to its portrayal of Korean beauty standards and plastic surgery. It is about a young woman who tries to adapt to her new university life after getting plastic surgery. She meets an old high school classmate who remembers her as she was before. See how the love flourishes and the complicated situations they face to accept that they love each other. It is a K-Drama that is also based on a webtoon, whose popularity, like the one received by the K-Drama, was a lot.

From the famous webtoon What happens to the secretary Kim? this K-Drama, premiered in 2018, was born. The K-Drama is about comedy and love. It talks about the life of Kim Mi So. She is a secretary who has worked for the CEO of a company for many years. After working for the same person for so long, she decides to resign and lead a calmer life, but this is something that her boss will try to prevent at all costs, giving her a lot of things. Will Kim stay working for her boss, or will she get on with her life? Find out for yourself! Whether it’s reading the webtoon or watching the K-Drama. With What’s Wrong with Secretary Kim? We close this list of 10 K-Dramas that are based on webtoons.

What is the most popular Korean Webtoon?

However, while many webtoons have their K-Drama adaptations, others do not. That does not mean these webtoons are not good. Many have many daily visits. So we hope that some of them will also have their adaptations to the screen in the future. Some of the most popular Korean webtoons are Sound of Your Heart, Kubera, About Death, Tower of God, and Days of Hana.

K-Dramas that are based on webtoons offer audiences endearing stories and characters. If you are a K-Dramas fan, knowing that many are based on webtoons may encourage you to read digital comics. They are worth it! Since it is the same way that it happens with some international movies or series that are based on books or stories, K-Dramas found a new source of inspiration in the most popular webtoons. Have you seen one of these K-Dramas yet? Have you read the webtoons yet? See you on an upcoming Korean Fashion Trends blog!

What K-dramas to expect in November December 2021?

Miyeon – the next “it” girl regarding Korean fashion?